Sure, a missed period may tell you that you’re pregnant, but it’s not the only way to figure out if you’ve got a baby on board.

Pregnancy starts at fertilization of your egg and its implantation in your uterus, which both occur several days before you actually miss your period.

Here’s a complete overview of the early pregnancy signs and symptoms and some tips on what you can do at this pregnancy stage.

The most noticeable sign of pregnancy is not getting your period when you expect it. However, your body might already be exhibiting some of these symptoms even before your next supposed menstrual period:

Cramping and Bleeding During Implantation

Having unprotected sex during your fertile window or ovulation time may result in pregnancy. Menstrual cramps, light spotting or bleeding within a week or two before your missed period might be a very early symptom.

Be careful though, as you might interpret these signs as if your period was actually starting. When the fertilized egg is attached to the lining of the uterus, implantation occurs. It usually occurs within six to ten days after ovulation.

Assuming you have a regular cycle (28 days), implantation bleeding or cramping may be experienced in the third week (20 to 40 days).

Implantation bleeding is light – you might see just a few drops of blood in your underwear or when you wipe after peeing. This may last for a few hours to several days.

However, should heavy bleeding occur, it might just be your regular cycle (or a very early miscarriage that most likely will go undiagnosed).

Basal body temperature (BBT) is a more accurate early sign of pregnancy. However, this only works if you’ve been tracking your BBT for several months prior to the first skipped period.

A few weeks prior to ovulation, your basal body temperature will range from 97.2 to 97.7F, which is the average BBT in the pre-ovulation state.

Within two days after your ovulation, BBT will increase by 0.4 to 1F. After your period, BBT will decrease. If it remains elevated, however,  it could be an early sign of pregnancy.

Upon conception, breasts begin to get ready to do the job they naturally there for – namely, breastfeeding!

The blood vessels in your chest begin to dilate, resulting in larger breasts, and your areolas will also get bigger and darker. These changes can be observed within a week or two after conception.

As a result, your breasts may feel swollen, tingly, and sore to touch. You might feel discomfort similarly to when you are expecting your period, but it may be worse if a pregnancy is starting. If you missed your period and you’re experiencing changes in your breasts and other symptoms, it’s time to take a pregnancy test.

Fatigue can be caused by a sudden increase of the hormone progesterone. This feeling of exhaustion doesn’t go away easily, as your body is starting to produce more blood to support the growth of the fetus. If you suspect you’re pregnant, your tiredness may well be a telltale sign, although it can indicate something else, like anemia. Cover all your bases before you decide it’s pregnancy.

By the way, once you’ve determined that you are pregnant, you can take steps to fight pregnancy fatigue including drinking plenty of water, eating nutritious food, and taking prenatal vitamins daily.

A classic sign of pregnancy in its early stages is nausea, commonly known as morning sickness. This might occur during the first weeks of your missed period. Nausea may be felt any time of the day, but it is usually worse during early mornings. “Morning sickness” is experienced by a majority of women in the early stages of pregnancy. However, if you have persistent nausea and/or vomiting throughout the entire day, you might be subject to a rare condition called Hyperemesis Gravidarum, which requires medical help to be addressed.

It is not entirely clear what causes morning sickness or Hyperemesis Gravidarum, although it is believed that several factors could be triggering them. An elevated level of the hormone HCG (human chorionic gonadotrophin) or genetic predisposition might play a role. Symptoms may include low blood pressure, weakness, dizziness, and throwing up often.

Nausea might subside after the first trimester, but at times this symptom may be present throughout your whole pregnancy. Morning sickness can vary in its intensity and duration in different pregnancies of the same mother.

Lack of appetite can be attributed to nausea and vomiting. You may experience strong cravings and hunger pangs. This is most apparent during the early stages of pregnancy but you should regain your appetite in the later stages. Keep an eye on your weight and if you start losing weight, talk to your doctor immediately. Try to prioritize getting enough fluids, as dehydration poses a serious risk to you and your baby.

Having a frequent urge to pee is a common early pregnancy symptom. You may notice that the urge to pee becomes more frequent, particularly at night. This is because of the hormonal changes that occur after you conceive. As a result, there is an extra production of blood and the kidneys need to work harder to filter the extra blood – hence the increased instances of urination. Normally, this symptom decreases during the second trimester, and becomes evident again during the third trimester of pregnancy, once your baby is big enough to push on your bladder.

You Feel Bloated and Tighter

You may feel and look pregnant even while the fetus inside you is still tiny or just a ball of cells (blastocyst). You may notice that your tummy is getting bigger or your tights are getting tighter.
A bloated feeling or heaviness in the stomach is a common pregnancy symptom that you may feel even before your missed period.

Farts and burps may follow as a result of the progesterone hormone present during pregnancy, which affects your digestion. You might get some relief by eating several small meals, instead of three large ones, throughout the day. You may also want to avoid fried and fatty foods.

Around 85% of pregnant women experience this symptom, usually during their first trimester. You may notice that you are no longer enticed by your favorite food, and worse, its taste or smell may make you nauseous.

This symptom is probably caused by the increased level of progesterone during pregnancy. Other women regain their appetite within the second to third semester. However, some women may experience food aversion throughout the duration of pregnancy.

This is another symptom attributable to the hormonal changes that your body experiences during pregnancy. The changes in hormone levels may influence the neurotransmitters of your brain, and this causes enhanced emotions. To somehow counter this symptom, try to relax and get proper rest.

You might find relief in meditation, mindfulness, or listening to relaxing and soothing sounds and music. Get your partner’s support, let him or her know how you feel, and surround yourself with friends and family who can understand and help you.

Dizziness is a common pregnancy symptom experienced during the first trimester. This is caused by the dilation of your blood vessels, which results in a reduced blood pressure. You won’t need to worry though, as this is necessary to create the additional blood your body requires during pregnancy; your blood pressure should go back to normal when you reach your second trimester.

Be careful, however, to watch out for other accompanying symptoms. If dizziness is accompanied by abdominal pain and vaginal bleeding, immediately consult your attending physician, as this might be a sign of ectopic pregnancy.

Digestive function is affected by increased progesterone levels during pregnancy. The hormone causes your food to pass slowly in the digestive system making your stomach and bowel movements difficult. If you don’t commonly have digestion problems, it might be an early sign of pregnancy.

Headaches may be felt during the early stages of pregnancy because the hormones estrogen and progesterone are preparing your womb for a baby. It may also be caused by low blood sugar levels during your pregnancy.

Lower back pains may also be apparent because your ligaments are loosening up in preparation for the weight that your body has to carry when your baby gets bigger. Bloating, constipation and implantation cramping may all contribute to a backache that you may feel during the early stages of pregnancy.

Though this is not a common pregnancy symptom, some women do experience drooling because of the excessive saliva that is produced before they conceive (ptyalism gravidarum). The excessive production of saliva may be associated with morning sickness and heartburn.

The extra liquid that accumulates inside the mouth may be caused by the avoidance of women to swallow because of nausea. Heartburn, which is due to increased acids, also results in increased saliva because it is an attempt by your body to physiologically cure the heartburn, as saliva is naturally alkaline.

A metallic Taste in Your Mouth

This symptom may be felt alongside strong odor aversion. The exact cause of this symptom is unknown, but some experts say that this might be caused by the fluctuating hormonal levels during pregnancy. Not all women may experience this symptom and those who do are usually relieved from this symptom after the first trimester.

This is a common pregnancy symptom. As your body produces more blood volume, you may find yourself drinking way more water than usual. This can become a cycle as you may then need to pee more often, and then feel like thirsty again. Of course drinking a lot of water ultimately is a good thing, as it keeps both your baby and you hydrated.

Shortness of breath may be experienced in the first few weeks of pregnancy because your body now requires more oxygen and blood to share with your growing fetus. This symptom may continue throughout the pregnancy, becoming more apparent with the growth of the baby as they require increasingly more oxygen and nutrients.

You may regulate your breath by maintaining an exercise routine, taking slow breaths, sitting in a proper and comfortable posture, etc.

The 16 pregnancy symptoms listed above are not definitive signs that you are pregnant but are all possible indicators. It is always best to have a pregnancy test if you suspect you might be pregnant. They’re also common signs and symptoms of other medical conditions that might require further investigation, so make sure you talk about them to your doctor if you are unsure.

What can you do now?

Experiencing these early signs of pregnancy is not a certain indication that you are indeed pregnant. These symptoms are similar to premenstrual symptoms or could be indicative of other health issues.

If you want to be sure about your pregnancy status, you can take a simple blood exam quite early to detect the amount of HCG hormone, and – if the result is not clear – repeat it a couple of days later to see if it’s increasing: this will tell you if you are pregnant with 100% precision. Other ways to test your pregnancy status are taking a pregnancy test and doing an ultrasound; however, both these tests will be reliable after a few weeks you have conceived.

Meanwhile, if you assume that you are pregnant but not yet confirmed by the tests, you may start doing these as prenatal care:

The above lifestyle rules are helpful even if you’re trying to conceive because they will increase your chances to do so and to bring to term a healthy pregnancy when you do. 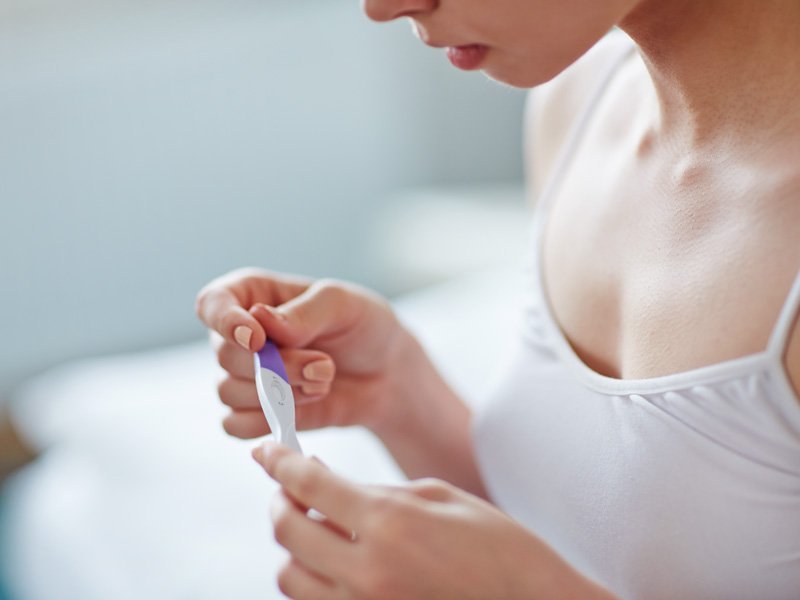