It can be challenging trying to communicate effectively with an autistic child. You might feel the child is ignoring you and simply have difficulty to understand what you say. You can clearly sense that interacting with others face to face is very difficult and confusing for an autistic child.

Overwhelmed by personal interaction, these children find it hard to focus their attention and learn the basic social skills that most children pick up easily.

Unfortunately, compromised social skills often prevent children with autism from forming meaningful relationships with others. This may be about to change, and that through interaction with a therapy robot!

Meet QTrobot – a humanoid robot designed to help children with autism become more social. Trobot is a cute white and blue humanoid body robot just over two feet tall with a screen where a person’s face would be. QRobot can see, hear, and talk, and importantly, it can also communicate non-verbally by showing facial expressions onto its screen and gesturing with its body. 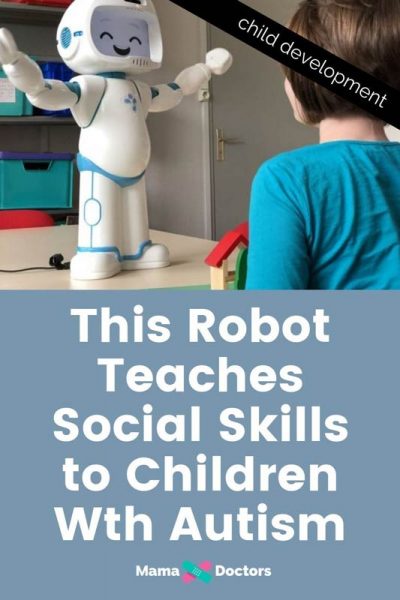 QRobot has been developed by LuxAI, a startup originating from the University of Luxembourg. According to the LuxAI website, the robot was designed to increase the efficiency of therapy for autistic children.

That sounds counterintuitive, doesn’t it – a robot to help humans with social interaction? But actually, it works because interaction from a robot is less complicated than the interaction between humans and it’s this simplicity that makes it easier to teach children with autism social skills.

“When you are interacting with a person, there are a lot of social cues such as facial expressions, the tonality of the voice, and movement of the body which are overwhelming and distracting for children with autism,” says Aida Nazarikhorram, co-founder of LuxAI.

“But robots have this ability to make everything simplified,” she says. “For example, every time the robot says something or performs a task, it’s exactly the same as the previous time, and that gives comfort to children with autism.”

Feeling at ease with a robot, these children are better able to focus their attention on a curriculum presented together by the robot and a human therapist, Nazarikhorram says.

The robot’s expressive face with exaggerated but simple expressions facilitates the process of teaching emotions to children with autism. For their study, that will be presented at RO-MAN later this month, the researchers gathered 15 children between 4 and 14 years who participated in two interactions, one with QTrobot and another in a one-on-one interaction with a human.

During these short interviews, children answered a few simple questions. They were also told a short story. Children were also asked to copy some movements the interviewer made, like lifting an arm.

In the interview with the robot, the children stared at the robot’s face about twice as long, on average, as at the human face.

Repetitive behaviors like hand flapping—a sign of being uncomfortable and anxious—occurred about three times as often during sessions with the human, compared with the robot, reports IEEE Spectrum. The good news is that the presence of the robot in the room saw children also increase their interaction with human therapists.

Says Nazarikhorram, “The robot has the ability to create a triangular interaction between the human therapist, the robot, and the child. “Immediately the child starts interacting with the educator or therapist to ask questions about the robot or give feedback about its behavior.”

University of Luxembourg researchers plan to present their results on 28 August at RO-MAN 2018.
There already are a number of digital solutions for mental disorders, but it seems that a humanoid robot brings a special aspect to the table that tablets and phones don’t.

Explains Nasarikhorram, “The child is just focused on the app and doesn’t interact with the person beside him,” Nazarikhorram says. “With a robot, it’s the opposite.” Robot-based therapy for autism has been studied for more than a decade and scientists agree that more research is needed with more children over a longer time to determine whether robots can really teach children social skills.
An interesting aspect of LuxAI is that the company is focused on making QTRobot easily programmable by autism professionals, even those with no tech background.

It’s natural to be worried that interaction with robots will move children with autism further away from human interaction and! EEE Spectrum raised this question with Nazarikhorram.

“That’s one of the fears that people have,” she says. “But in practice, in our studies and based on the feedback of our users, the interaction between the children and the therapists improves.”