Not only they are great for cooking, onions also have the potential to cure ailments and help out around the house. Because of their antiseptic and antibiotic high concentrations due to a high sulfur content, onions are considered to be a vastly versatile natural remedy. These are thought to be helpful for our bodies to fight off free radicals that are known to cause chronic disease, like cancer.

Native Americans used to treat colds and flu with them, and now onions are being recognized by the World Health Organization as a good way to relieve respiratory infections, bronchitis, cough, and congestion.

Here are some helpful uses of onions for common health problems:

Put a tablespoon of brown sugar over each side of a halved and peeled onion. Cover them for an hour and then eat this relish twice a day to reduce cough or even get rid of it entirely. Cough-causing microbes are powerless against the antibacterial properties of sulfur found in onions.
Sulfur is also a good agent for detoxing and has anti-inflammatory properties that can help reduce pain and inflammation when having a bad cough.

Worried that your child coughing at night will not enjoy a bite of raw onion?

Here’s a simple trick for you: just cut an onion in half, place the two halves on a plate next to your child’s bed and wait. In many cases, this simple trick will calm the child’s cough enough to allow them to sleep. Remember to keep the room humid to help the airways stay hydrated and remove the mucus.

To help fight hair loss and grow out your hair, you can boil an onion in some water and then use the liquid as a pre-shampoo rinse. The antioxidant will help against hair loss and also help it grow stronger and fuller, and its antimicrobial properties will fight against dandruff and promote new growth.

To try loosen a chest congestion, you can coat the chest area with a paste made of a crushed onion mixed with some coconut oil. Cover it with a dish towel and allow the onions to work its magic. They are like a natural antibiotic that helps strengthen the immune system. And just like an expectorant, this mixture can also release vapors to loosen the mucus in the chest that causes coughing.

With beneficial properties that relax muscles, strengthen the stomach and can regulate digestion, a teaspoon of onion tea every hour, can calm a colic baby with its soothing effect. Just boil a diced yellow onion in some water and drain it after cooling.

Inflammation and discomfort produced by insect bites can be reduced by placing a piece of onion or some fresh onion juice on the affected area. The anti-inflammatory properties will help soothe it.

Put inside of a thin sock a chopped up onion and tie it closed. Using a hat to hold it in place over your ear, keep it there to diminish the pain.

The film of your onion skin is great for cuts. Bleeding can be quickly stopped this way since it acts as an antiseptic agent. Also, the wound can heal faster helped by the antibiotic and anti-inflammatory properties. Infections will also be prevented by the antimicrobial substances.

You can soothe a sore throat if you gargle with a decoction made from onion skin and water. You can add some lemon and honey if the taste is too unbearable. The pain and inflammation in your throat can be reduced by the anti-inflammatory properties that onions have.

Collect the onion juice using a cheesecloth from a grated and squeezed onion. Also, make some peppermint tea and let it cool. Every 5 minutes take two teaspoons of onion juice and then the same quantity of peppermint tea, cycling between the two until the vomiting sensation goes away.

Bacteria and viruses can be absorbed by a peeled onion and this way the air will be purified.

Infection from a burn can be prevented by rubbing some fresh onion on the affected area. Skin regeneration can be accelerated and burning and redness are reduced by the sulphuric compounds.

Put some coconut oil on the bottom of your feet and apply thin onion slices onto the arch of each foot. Cover your feet with plastic wrap and then with a sock. Toxins, bacteria, and sickness should be drawn out by the onion overnight. 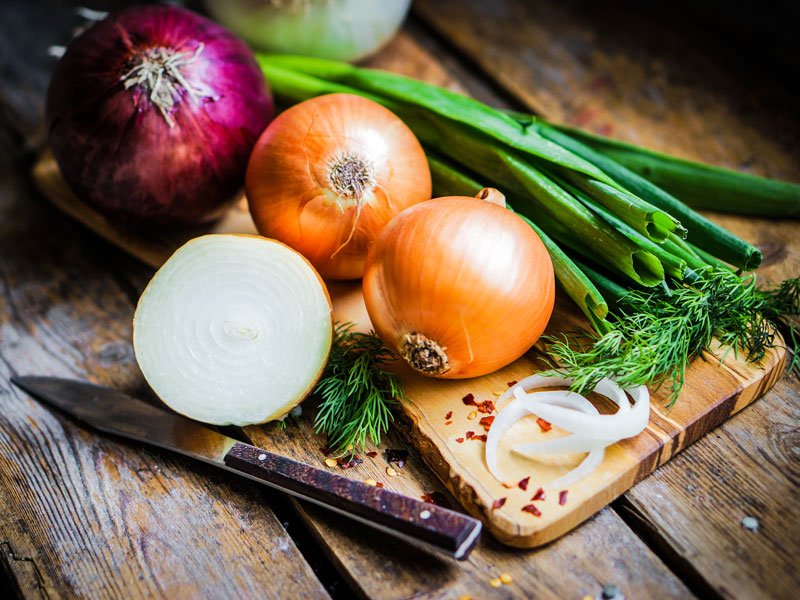