Dr. Linnea: Talking about airway infections and issues, there was a recent study by the WHO that estimated that 600,000 children died in 2016 from acute lower respiratory infections caused by polluted air. And actually, this report says that air pollution is one of the leading threats to child health, especially because of these infections. So what do you think about that?

Dr. Changa: I think that that number may be an underestimation because air pollution, number one, is so common in many parts of the world. And number two, because it's so common, it's very difficult to statistically link air pollution as a cause of illness where it may not be so obvious. So, let me give you an example. If I breathe polluted air, it's guaranteed that my immune system will not function properly. There are some particles that we inhale in polluted air that are permanently embedded in our lymphatic systems. And there's no mechanism for the body to actually filter these particles out.

So, in such a situation, your immune function will decrease, and then you may get a respiratory infection. But the connection between air pollution, and in this particular case, the respiratory infection because of the low immune function, is very difficult to prove in a scientific study, which is why I think the number 600,000 is actually a tip of the iceberg, perhaps, when it comes to the ill effects of air pollution.

And when we think of air pollution, we have these visuals of burning piles of rubbish, of plastic, of factories, putting on chimneys of smoke into the atmosphere. But one other area that we fail to recognize is something a lot closer to home, and that's indoor air pollution. And you could have pristine outdoor air quality, but yet your indoor air may be polluted due to any number of reasons. If you use a lot of aerosols, be it air fresheners or perfumes or deodorants or anything that comes out of a spray can, you are releasing a lot of suspended hydrocarbons into your indoor air.

And these molecules are actually very dangerous because they can melt into what we call lipid membranes. So, it is very easy for these molecules to get entry into your cells once we inhale them. Air fresheners are particularly dangerous in this situation. If there's any equipment that emit aerosolized chemicals that are not working properly, it may be a broken refrigerator with a leaking system, so your household equipment must be checked and serviced and then kept safe. And the use of aerosols indoors including aerosolized perfumes.

Well, essential oils have a lot of health benefits, I think, when used appropriately, but again, the operative word is oil. So know that when you inhale an oil, it will really, really be quickly internalized into your system. I have or I try to live by a simple rule. If it's not good enough to be eaten then I don't put it on my skin and I don't breathe it. And this has been a gradual journey in my own personal life with my family because we know, for instance, that the skin is a very, very effective way of delivering medications. We do it in the healthcare setting all the time, whether it's analgesics, pain medicines, we can put a patch on someone's skin and that will absorb into the system. We have nicotine patches where the skin absorbs nicotine through the skin.

So what's gonna stop your skin from absorbing a cream that you put on your skin or the deodorant that you use? It has the same absorbent properties. And so this is just something to be mindful of. Yes, outdoor air pollution is an issue so in whatever way you can take a stand, make a position, get your community organized into finding sustainable solutions to the issue of air pollution, I encourage everyone to get involved as much as they practically can.

But what's really within our control is indoor air pollution, which we can really have a dramatic influence on based on our own practices, and then what we put in our own skin. So, we take pollution to another level. So, for instance, if you just take a skin product of any kind and you read the label, sometimes they're almost food-grade because the ingredients are all organic and they're from a certified source, but sometimes I would see certain things that I don't even recognize, they're just chemical names one after another.

And in my own situation, I apply this little rule, “Would I eat this?” And if the answer is, “Heck no,” then I never put it on my skin. I do appreciate that it is not easy to have hard and fast rules like this. But having rules of thumb where we are conscious about what we breathe and what we put on our skins, having that awareness, having that state of consciousness about it, I think, is very important when it comes to toxins and pollutions.

Dr. Linnea: Is there any recommendations in terms of going out, like for example, in this report, cities that are heavily polluted like Los Angeles, Fresno, even St. Louis, like so many cities in North America have a high level of pollution. Is there anything that can be done by a mother to reduce the amount of pollution that gets breathed in by the child?

Dr. Changa: I think the area of most success is going to be avoidign the highly polluted areas. But practically, how do we do this? What if your route to school is through one of those areas? What if your school is situated in one of those areas? So, that becomes very challenging because these air particles are actually very small. And so a usual surgical mask will not keep polluted air out, and how practical is it to have a biohazard-grade mask on all the time? So there's a line between living with risk and avoiding risk that sometimes can get very blurred. And we must be cognizant of the fact that a lot of the time people live in a certain area not out of choice but out of necessity. And then, so what we do around that?

Air pollution is one thing. Noise pollution is a really, really intimate interest of mine because we know that when we have noise pollution it affects academic performance, anxiety, depression. Just now, in the last 10 years or so putting this together, where certain schools near a very busy railway or an airport or a flight route, their academic performance, just based on that, is lower than a school where the noise level is much more acceptable. And they've done crossover studies were students that were either coming to these schools or left these schools where these schools are closed up and relocated elsewhere you almost immediately see the difference in children's behavior and performance.

And this is something that I try to maintain at home. I tell my children, if we want to really do a lot of horseplay, which is very healthy, we either have a time for that or we go outside and let all our energy out. But I truly believe that even in our homes, we must, as much as we can, preserve a quiet state. I've been in workplaces where there may be an alarm bell going off, maybe the fax machine is on the pantry, and it's making its noises, a drinks cart is going by with the broken wheels, and that's making the noise, and someone's on the phone speaking extremely loudly.

And if we just stop to appreciate all of these sounds, that whole area's polluted with sound, and then you find that you can't concentrate and your mood become irritable. So, I'm glad that you brought up the issue of air pollution and how it affects our health and our wellbeing. But noise pollution is right up there as well. 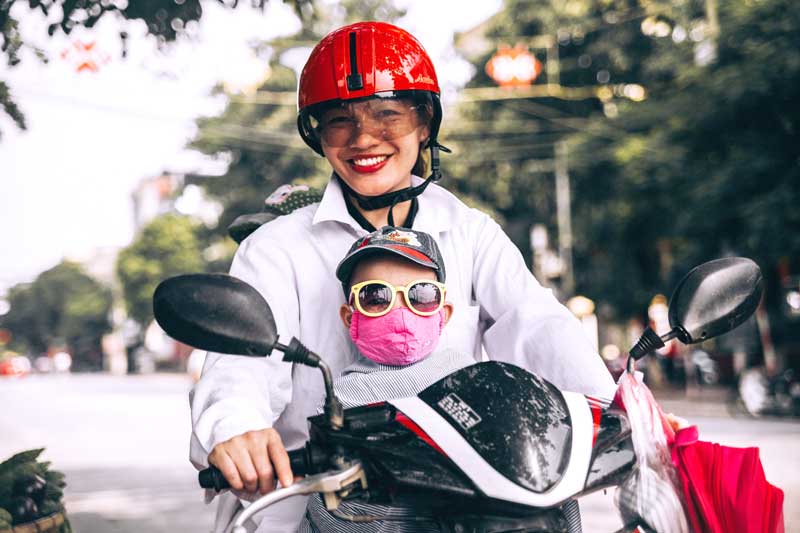