Dr. Linnea : You mentioned having more than one child in the same environment, which is something that as a parent, especially as a parent of three, my kids, you'd have that problem a lot. And often, parents and mothers are wondering, how do I manage children moving in the same environment who have different interests and different ages and who are constantly, you know, disturbing each other?

Sharon: So one of the things that we do in the classroom is when a child wants to do some work, they have the choice of sitting at a table, or they have a choice of taking a mat to it on the floor, and that becomes their workspace. And then everybody else knows, that's that person's workspace, you don't touch it.

So that's what I recommend for parents at home, have a workspace for each child or mats that they can take out and put down and then explain to the other children, “You can sit and you can look, but you can't touch what the other person is doing unless you're invited to.” Then it becomes, the person who's doing it, becomes their sacred space and they know that it's not gonna be touched. It's very hard when you have very small ones because explaining to that young one… they get that idea but then you just sort of maybe have that on a table where the young one cannot reach, but you have to start to set the boundaries and be able to say, “No, this you don't touch.” And then you remove the offender.

Dr. Linnea: Well, this is interesting because, I mean, it's interesting that you mentioned that because moms, our biggest problems we have is actually managing tantrums and difficult behaviors, right? Because one thing is to say it but the other is to actually manage two children who start fighting for the same toy or for the same activity, and you never know if you should, you know, encourage them to share that activity or…

Dr. Linnea : So how would you suggest?

Sharon: It's a hard one. You know, you want your children to share, you really want them to share but then there are also times when they should be able to have their own thing, right? I think it really depends on the children, it depends on the dynamic.

So what my daughter had wouldn't actually be something that my son would want to play with but he only wanted it because she wanted it, right? So that's a different…you know, if it's something that he was actually interested in, then I would be able to say to my daughter, “Look, he really wants to see what you're doing because he finds it interesting. So why don't you show him?” And then you have them sit side by side and sort of set that boundary where the younger one is watching and learning from the older one. So they've got that nice bond going and it's sharing in a sense but it's sharing under her terms because she's under control. She's got it under control because she's the one who's showing. So that's one way.

If it's just, “I want it because you want it,” then that person, I would say just, “You need just find something else, let's go over here.” And it's distraction, really it's distraction, or complete, “Let's go to a different room.” That's sort of the key, I think, because you do want to foster…there's nothing more beautiful than a child being able to show another child something, what older or younger, doesn't matter, just somebody that has something to offer.

When, first of all, that child is imparting something to another child, which makes them feel really good, and the younger one, or the other child that doesn't know that thing is feeling, “Oh, I've been given some attention.” And sometimes that's all it is. They just need that little bit of attention. But also for the child that's doing the showing, they can sit back and go, “Okay, I know, I know how to show, I know, I know what I'm showing. I understand this thing.” And that gives them a little bit of confidence. And it also it kind of fosters that feeling of, “I can share some…not just my things, I can share something that I know.” Right? And then you're trying to create an environment where you're not just sharing things and activities, you're sharing something that you know and something that you feel, and this starts to build camaraderie and companionship. But then you also have…because that the other child has satisfied that they've had some attention, they're better able to walk away and go and do something else.

And the next time, as they mature, then the other child can say, “You know, right now I don't want to show you but I can show you later on.” That starts to build, right? So as the younger child gets older and the will begins to develop…I got a little guy in here who age-wise he was right to be here but he was more of a toddler being, and it's taken…he's been here two months and I realized today I looked at him, and I thought, “Oh.” Now, when I'm saying to him, “Don't do it, don't do that,” you can see the hesitation because his will is starting to say, “Oh, wait, wait, wait, wait. She said don't do that.” Or, “Don't do it this way.” Or whatever it was I said to him. You could see the body stop and go, “Okay. She said something. What did she say? Oh yeah. Okay.” And then he was able to act on it. So it's that, having the two sharing something and having satisfaction from both sides but then that means then now, you can separate a little bit and both of them are okay with it. They both had some measure of satisfaction, and then you build on that. 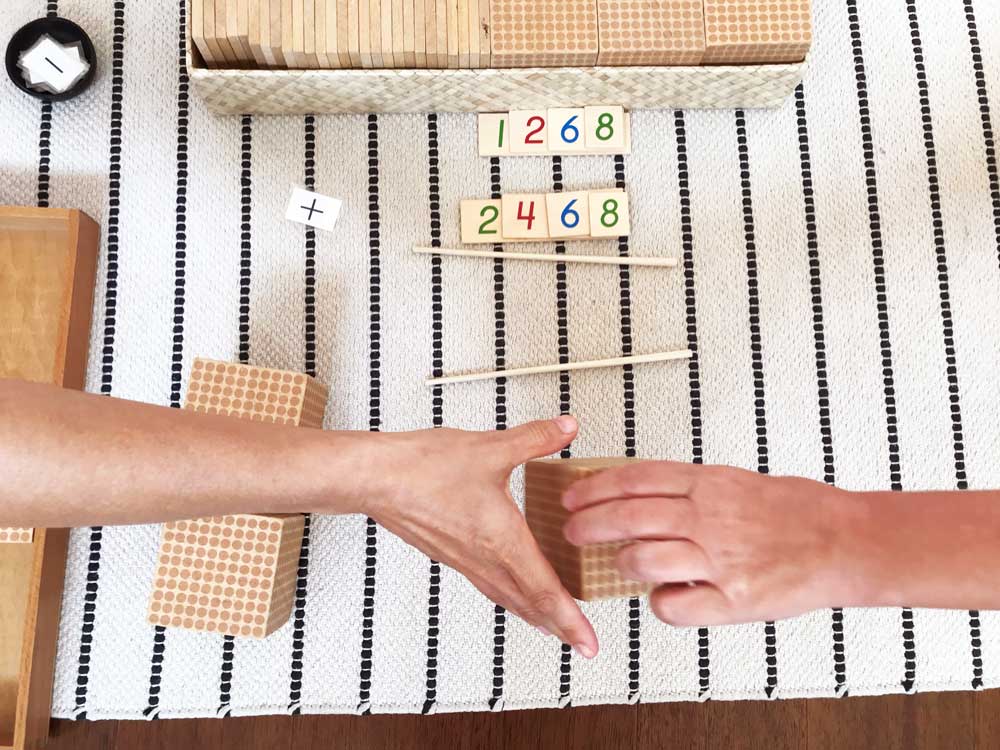